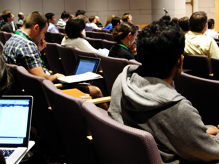 Participants listen to speakers at the Ecology opening workshop at SAMSI.

Last week I took part in SAMSI’s 2014-2015 Program on Mathematical and Statistical Ecology (ECOL) Opening Workshop. The workshop combined a collection of polished talks by established researchers on the interface of mathematics, statistics and ecology with the stimulating environment elicited by numerous energetic participants with an eclectic set of academic backgrounds, career goals and scientific expertise. This was my second stay at SAMSI. Like my first, this workshop significantly altered my view of mathematics’ place in the study of ecological systems and the environment. It challenged me to explore areas of mathematics and statistics for which I had previously been uncomfortable and ecological applications I have always been interested in but didn’t have the time to study.

As a graduate student in applied mathematics I studied a class of models called integral projection models (IPMs). These models allow one to study the evolution of a population in time by specifically structuring the population by one or more continuous traits (like size for an animal, or soil depth for a plant’s seed bank). Much of my time was spent proving theorems about various versions of these models, which was very enjoyable for me at the time. However, after attending Jim Clark’s talk Dynamic Multivariate Analysis for Biodiversity and Climate Change and the session on multivariate inference and prediction in general, I became convicted about the way scale was incorporated into my IPMs and how this would influence my ability to predict population dynamics using these models. Many times we glean population and environmental parameters for our models from estimates in the literature, without adjusting for (or taking into account) the scale assumptions inherent in our model – at least statistical novices like me do. How do we make sure we are using parameters that are assuming the correct scale? How do we even attempt to make numerical predictions from these models?

One way to explicitly incorporate scale and perform model validation when studying a population is to parameterize and simulate an individual-based model (IBM) and see if the emergent properties of the IBM resemble those of the analogous IPM (the work of Rees, Childs and Ellner 2014 http://onlinelibrary.wiley.com/doi/10.1111/1365-2656.12178/abstract hints at such a comparison). IBMs were the topic of many of the talks at the workshop, and are flexible enough to tackle problems in network ecology, hydrology and the ecology of animal movement, among other areas. IBMs are not a class of models I studied as an undergrad or graduate student, and it’s my guess that many applied mathematicians and mathematical biologists are also in this boat, given the discrete nature of these models. I suspected for some time now that I needed to take the time and learn a thing or two about IBMs, and this workshop confirmed those suspicions. This week I picked up a copy of Railsback and Grimm (2011) and started the process of learning NetLogo.

The workshop also exposed me to many exciting subdisciplines of ecology and environmental biology that I have always been aware of, but never had the time or maturity to fully appreciate. One of those areas is mathematical epidemiology. I have always admired Carlos Castillo-Chavez for his work as a mathematical/computational biologist as well as his ability to give those in historically underrepresented groups a chance to succeed in mathematics. He was even kind enough to give a talk at our inaugural Midwest Mathematical Biology Conference at UW-La Crosse in May. His talk, Introduction to the Mathematics of Infectious Disease Dynamics opened a great series of talks in the ecology of infectious diseases session, which concluded with Jennifer Hoeting’s Parameter Inference and Model Selection in Deterministic and Stochastic Dynamical Models: Modeling a Wildlife Epidemic. In this talk, Jennifer discussed a something that has long interested me – the study of inverse problems for systems of stochastic differential equations (SDEs). This area combines analysis, probability theory, stochastic processes, dynamical systems, numerical analysis, computer science and statistics. Seeing a wonderful opportunity to explore a wide array of interesting problems, I decided to join Jennifer’s working group, Statistical and Mathematical Methods for the Ecology of Infectious Diseases. While the set of possible research questions for this group is quite large, I am extremely interested in analyzing various data sets for Dengue fever, West Nile and Malaria to determine how the error structures seen in real data sets relate to those predicted by SDE models, as some have (rightly, in my opinion) questioned the ability of SDE models to effectively model the dynamics of infectious diseases.

Eric Eager talking at the reception and poster session.

The opening workshop of SAMSI’s 2014 Program on Mathematical and Statistical Ecology had a transformative effect on me as a mathematical ecologist. I am very grateful for the diverse perspectives of all of the speakers and attendants, only a few of which I mentioned in this blog, as I am much more aware of the sheer size of the field of ecology, and the challenges that face us as we try to tackle ecological problems using quantitative approaches. These workshops have a way of simultaneously exhausting and rejuvenating me academically, and I am looking forward to continuing this work now that I am back in La Crosse.