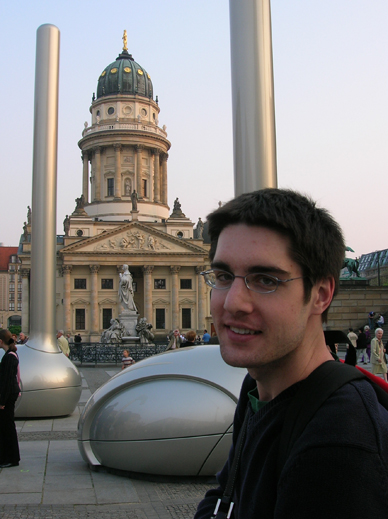 David in Berlin around the time he was working at CERN.

David Lawlor always knew he would end up in some kind of STEM career. His mother works for IBM, his father is a lecturer at the University of Vermont, and his brother is a chemical engineer. His older brother, Patrick, is a chemical engineer working for Conoco Phillips near St. Louis. David grew up in Vermont, where he played ice hockey through high school. His mild demeanor would never reveal that he was a two-time state champion defense man! He’s also a big fan of the hockey team from the University of Vermont.

(L-R) David’s father, his brother, David and his grandfather when David was graduating from the University of Chicago.

David went to college at the University of Chicago and double majored in Mathematics and Physics. During his senior year, he made math his primary major with the intention of becoming a math teacher. After applying to several positions and interviewing at a boarding school he realized that the emphasis was more often on discipline than on instruction, which was not where he wanted to spend his energy. Around the same time, one of his physics professors emailed him to advertise a position in the Physics department. The professor was a primary investigator (PI) on a the ATLAS tile calorimeter, a subdetector project for CERN (the European Organization for Nuclear Research), the organization that operates the Large Hadron Collider. At that time they were assembling the detectors underground and needed some people to help commission the detector and write some computer code. David was accepted for the job, and three weeks after graduating he moved to Geneva, where he lived for a year.  When he first arrived, he worked mainly on the detector in the experimental cavern, but after a few weeks he broke his arm in a bicycle accident. As a result, instead of working on the physical part of the project, he taught himself how to write computer code and learned how to use Linux, python, C++, and ROOT (a data analysis package for high-energy physics.) There were massive amounts of data being generated by the computer simulations at CERN which record and visualize explosions of particles that result from the collisions at the accelerator. It was during his time at CERN that David became convinced applied mathematics was really the area he wanted to pursue.

David with his advisor, Andrew Christlieb, at Michigan State University.

After returning to the states, David worked for a small research firm in Michigan funded by SBIR grants while he applied to graduate programs in applied math. He ended up going to Michigan State for his graduate degree, where his thesis dealt with sparse Fourier transform (SFT) algorithms.  The SFT is an algorithm that processes data 10 to 100 times faster than what is possible with the fast Fourier transform (FFT), the previous fastest technique. The SFT searches for an area of the spectrum has significant energy and omits those that are sparse. His research applies not only to this year’s Massive Data program but also the LDHD program next year.

David said he first heard about SAMSI when he was reading a research paper in which SAMSI was acknowledged as hosting a workshop that had initiated the research. He went to the website to find out more about SAMSI and discovered the organization had postdoc positions, to which he applied as he approached graduation. He was excited to move to the area, having access to many experts in the field at nearby universities and at SAMSI itself.

“I really liked going to the opening workshop and the astrostatistics workshop,” said David, “It was great to get to meet so many people from various disciplines and to realize that everyone is interested in the same problems.” David also said he particularly liked hearing Tamas Budavari’s (Johns Hopkins University) presentation on statistical methods in astronomy.

David is involved with two working groups that are currently using data that Budavari provided from the Sloan Digital Sky Survey (SDSS). He said it is really interesting to work with the same data using two very different algorithmic approaches. “I’m very grateful that SAMSI is able to bring together practicing scientists, statisticians, and applied mathematicians to work on problems of mutual interest,” said David.

Next year, David will spend his time in the Math department at Duke, but will also be very involved with the LDHD program at SAMSI.

In addition to being an applied mathematician, David likes to think of himself as a foodie. He is very committed to the farm-to-table concept and is currently getting seafood from Walking Fish, a community supported fishery. He also bought his Thanksgiving turkey from Coon Rock Farm and plans to join a CSA (community supported agriculture program) in the spring.