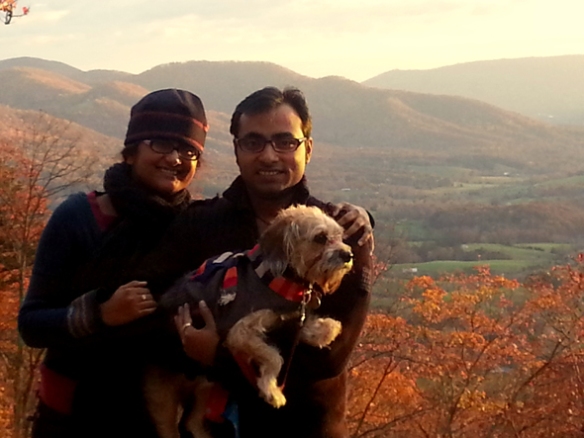 SAMSI postdoctoral fellow Jyotishka Datta decided not to follow the family tradition and become a doctor. Instead, he decided to follow his other passion, which was mathematics and statistics. 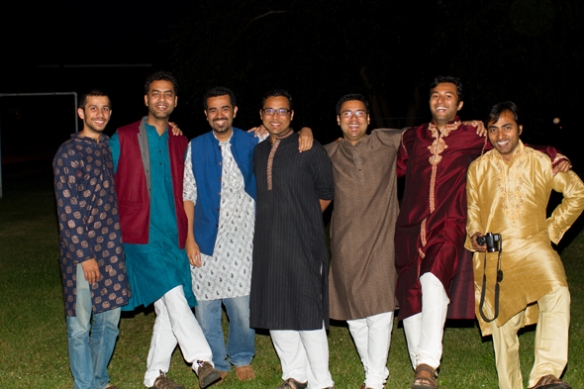 Jyotishka grew up in Kolkata, India. He went to Ramakrishna Mission Residential College Narendrapur, for his higher secondary education. This was one of the best schools in the region and here he had the opportunity to study with some of the brightest and extremely motivated students. It was then that he decided to pursue a career in a field of research.

Jyotishka went to the Indian Statistical Institute (ISI, Kolkata) for his B.Stat and M.Stat degrees. He developed a strong background in theoretical statistics and was introduced to programming and real-life applications in human genetics. “I had many wonderful teachers there. Not only did they inspire my love for Statistics and Probability, their teaching helped me in many ways on my path to become a researcher and teacher. One of them was Professor Partha Pratim Majumder. He is the head of the human genetics unit at ISI, and the director of the National Institute of Biomedical Genomics (NIBMG) in India. “He used interesting real life examples to demonstrate the need for powerful statistical methods in human genetics that inspired me to develop methods for complex, high dimensional genomic data. I fully realized the importance of his teaching only after I joined the ‘Beyond Bioinformatics’ program at SAMSI,” said Jyotishka. 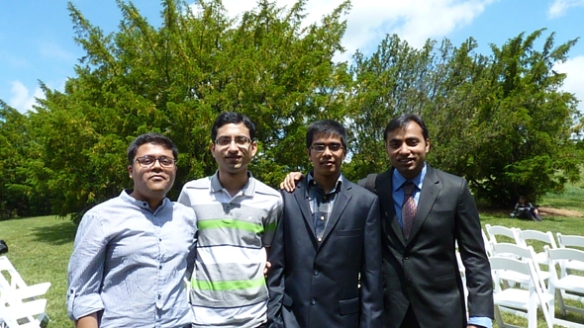 After working with Barclays Bank in Mumbai for a year developing policies and evaluation strategies for customers prior to their acquisition at the bank, Jyotishka came to the U.S. to study at Purdue University for his doctorate in Statistics. He started working with Alan Qi, who is an associate professor in the Departments of Computer Science, Statistics and Biology. After working for one year in Statistical Machine Learning with Prof. Qi, Jyotishka started working under the guidance of Jayanta K. Ghosh, who became his thesis advisor at Purdue. They worked on the theoretical aspects of multiple testing and model selection. “One day he showed me this new paper on the Horseshoe prior that had excellent numerical properties and was becoming very popular in the Bayesian community,” said Jyotishka. One aspect that needed to be looked at was the theoretical properties. After about a year, he could prove theorems that this horseshoe prior was asymptotically optimal.

One of the authors of the Horseshoe Prior was Nicholas Polson, professor at Chicago Booth School who visited Purdue in March, 2014 and they talked about these special class of priors. “I was also working on these priors for a different problem with Anindya Bhadra at Purdue who is also a visitor at SAMSI now. Anindya introduced me to Nick and he proposed this new idea that we can extend the Horseshoe prior to sharpen its ability to extract signals from noise. We named this prior ‘Horseshoe Plus’ prior,” explained Jyotishka.

He said it’s been nice to be able to collaborate with Anindya face-to-face at SAMSI as they begin to complete this research. 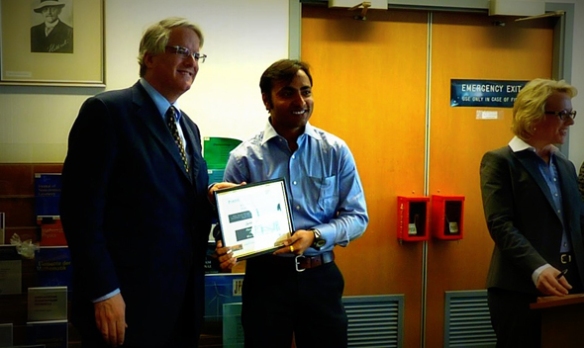 Receiving William J. Studden award for an outstanding publication in a Mathematical Statistics Journal, from Jeff Roberts, Dean of the College of Science, Purdue University.

Currently Jyotishka is working with Duke Statistics professor David Dunson. They are working on Bayesian non-parametric analysis of ‘sparse’ point processes. This is motivated by a variety of application areas, where the interest is in flexible modeling of the intensity of ‘rare’ event realizations. One particular example is cancer genomic studies collecting data on rare variants, where the focus may be on assessing differences in the variant profile between two groups. There is a growing interest in this area as the common variants identified by the Genome Wide Association Studies (GWAS) often account for a small fraction of heritability and susceptibility to a disease. This is also made challenging by the fact that the number of potential locations of these variants is massive but the intensity is zero in a vast majority of the locations. This also brings the issues of computational efficiency to the fore.

Jyotishka is also collaborating with Sandeep Dave, Associate Professor, Division of Oncology, at the Duke School of Medicine and they are studying RNA-seq analysis of diffuse large B-cell lymphoma (DLBCL). “One of our main objectives is to build a robust supervised classifier to classify subjects into two known subtypes of DLBCL, namely ABC and GCB”. 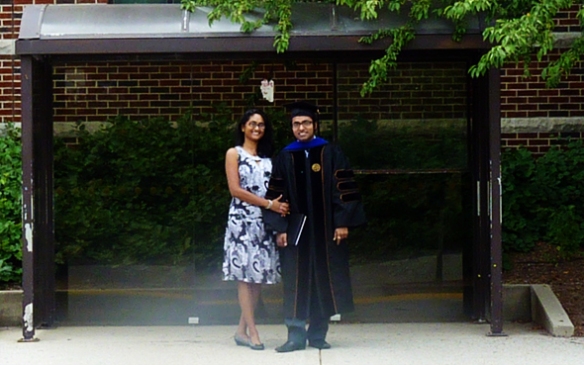 Shalini with Jyotishka on his graduation day.

Jayanta Ghosh, his advisor at Purdue, was the first person to recommend to Jyotishka that he consider coming to SAMSI for a postdoctoral fellowship. And his good friend, Sanvesh Srivastava, who is a SAMSI second year postdoc this year, also told him about the various nice opportunities that this program offers to a postdoc.

When Jyotishka isn’t working at SAMSI, he likes to read books and occasionally write poetry and scripts for theatre. He was involved in theater at ISI and together with his friends started an inter-college drama festival at ISI. The idea was to create a platform for college students to gather and perform their own plays. Jyotishka also loves drawing and has a long-cherished dream of writing a graphical novel someday.

Jyotishka married Shalini in 2012. They have a dog, Max, who is a terrier. They love going for long walks with Max and exploring local family-owned restaurants and coffee shops. He also likes to blog. (Guess what he will get to do at SAMSI now?)

Error: Twitter did not respond. Please wait a few minutes and refresh this page.